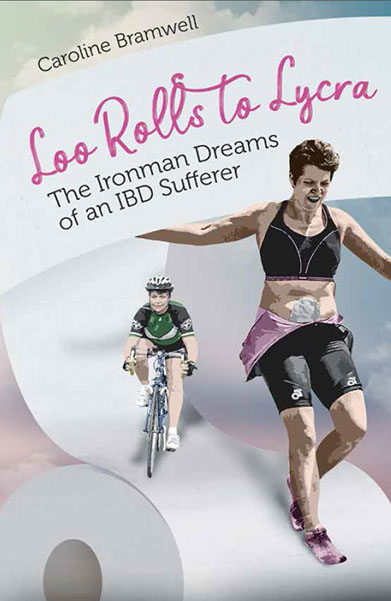 Loo Rolls to Lycra: The Ironman Dreams of an IBD Sufferer is the inspirational and insightful autobiography of Caroline Bramwell, a wife and mother who believed her life was going down the toilet when she was diagnosed with Ulcerative Colitis, an inflammatory bowel disease. With an encyclopaedic knowledge of every public toilet, bush or tree to dive behind, and after numerous extreme dietary regimes, Caroline elected to have her large intestine removed, and to live with a permanent ileostomy.

A self-confessed couch potato, Caroline turned to sport after surgery, dispelling the medical profession’s ‘you can’t do that’ attitude by announcing her London to Paris 24hr cycle ride. Motivated to learn to swim by her children, her enthusiasm for triathlon was lit after meeting Ironman world champion, Chrissie Wellington.

Caroline has competed at all triathlon distances, including the full Ironman UK, and has become one of the UK’s leading ostomy triathletes. Loo Rolls to Lycra is the epitome of the self-belief that anything is possible.